The main feature that distinguishes an AGM VRLA battery from a traditional one is the gas recombination technology. For a traditional lead-acid battery the phase of charging is characterized by the dissociation of water into hydrogen and oxygen.
The two gasses leak from the caps, while the level of electrolyte inside the battery decreases. An AGM VRLA battery uses instead the principle of recombination.
Thanks to a special microporous separator (Absorbent Glass Material), impregnated with a controlled quantity of electrolyte, the oxygen released from the positive plate after the dissociation of water during charging, can migrate to the negative from which is fixed and then recombine with hydrogen, restoring the water that was dissociated.
This establishes a closed electrochemical cycle, without any gas emission and without water consumption. AGM VRLA technology is ideal for applications requiring high starting current, extreme resistance to charging and discharging cycles, no maintenance and no leakage of liquid or gas. 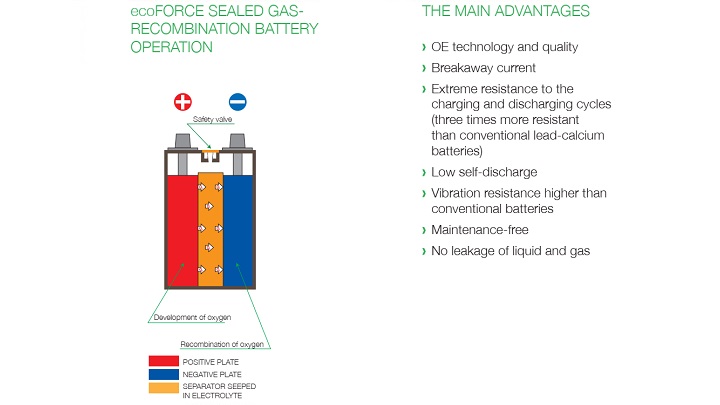 FIAMM Neptune batteries have been developed to provide power for boats and all kinds of caravans and...

Bike applications are the most diverse, spanning from scooters and powerful motorcycles to niche...